It is still quite strange flying for 4 hours across 3 time zones and still being in the same country but it does make you realise how vast Australia is. We’d booked a brief trip to Perth at least 6 months ago to meet up with one of Michelle’s Australian friends she’d met in London who was back home, in Perth, for Christmas. This was all booked before we’d even started looking to buy a house so it has ended up breaking up Christmas and the proper move in to our new place.

Once we arrived at the Ibis hotel for a basic first 2 nights in the centre of Perth we decided to go for a wander into the town to see what there was to do. The tourist information recommended a few places so we wondered over to Elizabeth Quay on the Swan River which is a modern pleasant cafe/restaurant area with a few sculptures around. There is plenty of development going on with new tower blocks in progress. We stopped for a bite to eat and had a walk around including the modern glass bell tower housing some of the bells of St Martin, we didn’t actually go up as it was quite expensive!

We found a pub with its own brewery so sampled some of their beer before getting a free bus over to Kings Park for some fantastic views over the city. Due to the 3 hour time difference and an early start we we feeling a bit tired so headed back to the hotel for some dinner and an early night.

The next day we’d booked to go to Rottnest Island with Michelle’s friend and her friend too. We had a fairly early start to get the train to Fremantle to catch the 08:30 ferry to the island. Being Saturday, in school holidays it was pretty busy but we got seats together. Once on the island we headed over to get some hire bikes. There is a bus that goes around the island but other than staff there are no cars so bikes are the easiest way to get around. Michelle remembered how to ride fairly quickly and we set off exploring and looking out for Quokkas on the way.

The island has a small town, holiday homes which seem to be booked years in advance and lots of beaches and coves with pristine clear water. We stopped off for a paddle at one of the quieter beaches. Unfortunately we didn’t have snorkeling stuff with us as it probably would have been great in some of the rocky parts.

After a beer and a spot of lunch in the pub at the settlement we headed back out on the bikes in search of Quokkas, which after half hour or so we found. Quokkas are small marsupials found on a few islands off Australia with Rottnest having a fairly large population. The island is even named after them as the Dutch thought they were large rats so named the island Rat-Nest Island.

They are cute little things and very friendly to humans, probably because they think you might have food. You’re not meant to feed or touch them so they don’t become dependent on humans. Their faces look like they are smiling so there is a “thing” to try to get a selfie with them although we didn’t manage that. 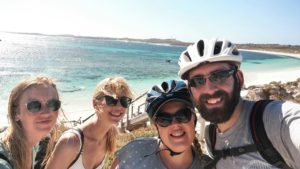 After our Quokka hunting was over we headed around the south of the island stopped off at another beach and for some views before dropping the bikes off in the town. We were all pretty tired after a long day in the sun and Michelle burning 2500kcal (mainly from fear) after cycling ~28km so we jumped into the standby queue for an earlier ferry back which we just got onto. The return trip was quite choppy as the boat powered pretty quickly through the waves. We got back to Fremantle where Michelle decided to run off the train with my phone just as the train doors were closing to give her friend back a pass we’d ended up with in our bag. This did mean I had a nice peaceful trip back to Perth! Fortunately there was a train 20mins later which Michelle jumped on and I tracked my phone (and Michelle) back to the hotel on the iPad we had in the room. I had a rack of pork ribs for dinner, with a beer on the house as one of the waiters forgot to put it through when we originally asked for another. We crashed out quite early again with Michelle suitably happy for finally seeing Quokkas.

The next morning was our 5th wedding anniversary so we’d booked a nicer hotel (the Westin) to enjoy the second half of our holiday. Having done most of Perth we chilled out by the pool for the next 2 days as well as enjoying an anniversary dinner at the Perth revolving restaurant.

For New Year we had a nice dinner at the hotel restaurant, went back to the room and struggled to stay awake until midnight. Fortunately we didn’t miss New Year and watched 2 sets of Perth fireworks from our hotel window with a bottle of sparkling.

Perth is a nice city but there isn’t a huge amount to do, if we’d had a bit more time we’d probably go down to the Margret River wine region but it would be another long day and we were happy just to relax for a bit before the move into our new house this week.