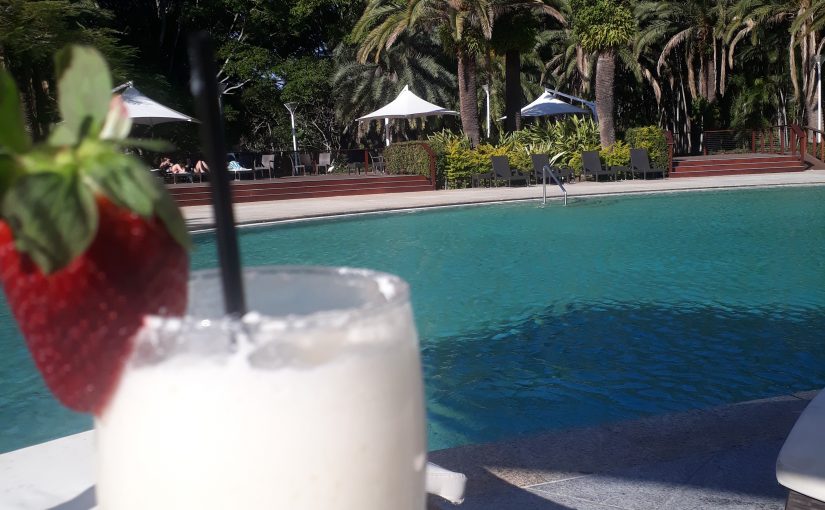 This week we headed up to the Gold Coast for the wedding of one of Michelle’s friends, and also stayed on afterwards to enjoy a bit of winter sun. We started at the resort the wedding was being held at before heading over to South Stradbroke Island and finally back to stay in Surfers Paradise for a few nights,

We started of staying just outside of Surfers Paradise at the RACV Royal Pines Resort, the resort was basically a hotel in the middle of a large pro golf course.

I don’t play golf so we just spent quite a bit of the time by the pool and visiting the local shopping centre to get supplies. It was great to get some sunshine after living in Australia for over 6 months – I’ve ended up coming from a UK winter to a few weeks of Melbourne Autumn then into a Melbourne winter. Whilst it isn’t that cold compared to the UK it hasn’t been that warm. Up on the Gold Coast it was a nice 20C most says with sunshine, there was a strong wind that started at 3pm each day though.

I did go to Top Golf with a few other guys which was good fun. It is basically an electronic driving range, there are targets on the range and all the golf balls are electronically tagged so you get points if you get it in the target. You can play various games such as highest score or aiming for targets in order, most importantly you also have beer brought to you whilst you are playing. I’ve played Top Golf in the UK and it is good they have it in Aus now too – however it did prove that i am rubbish at golf and should never be let lose on a real course! Even on the weekday night that we visited it was very busy – you can’t book so we had to wait around an hour for a bay. There are plenty of bars and places to get food whilst you wait which meant we could get some dinner, it wasn’t too expensive either.

We had a great time at the wedding with the ceremony outside in the sun and the dinner and reception held inside the hotel.

The following day we headed towards South Stradbroke Island and the Couran Cove Island resort. The resort has no cars so you park up on Hope Island Marina and then catch a pre-booked ferry across to the resort. The resort is basically a sea lagoon surrounded by cabins and room of different sizes. Some overlook the lagoon on the beach and others overlook the sea/marina side. There is a small island in the middle with a few swimming pools and a poolside cafe where we had dinner both nights. There are a few other restaurants, loads of sports activities, kayaks and paddle boards to use on the lagoon.

On the first evening we headed over the the sunset beach to watch the sun go down with a few beers. The bar was only open on Saturday on the off peak season so we timed it well. There is a shuttle service that takes you around the outside of the resort via a few stops, this was only running twice a day during off peak but think it runs more in the summer. We took it the next day to the surfers beach on the East coast, it was another sunny day so made the most of it and went for a swim in the sea, play on the beach and then got the ride back to the main resort where were went for an afternoon kayak around the lagoon.

Couran Cove was a great little resort, it was very quiet when we were there but it must be crazy busy during peak times, i would certainly go back during the off peak season though. You probably wouldn’t see as many wallabies hopping around on the beaches in the peak season as we did either.

For the final few days we headed over to the city of Surfers Paradise where we stayed in a 32nd floor apartment with great views over the city and sea. After having AU$3 steak + AU$3 for each extra side we had a load of beers in an Irish pub – nothing like a real Irish pub though, no one else seems to get it right. Less than $10 for a steak dinner was good though – tasted alright too.

The following day we headed over to the Movie World theme park. Unfortunately the new, crazy long, DC Rivals coaster was shut for maintenance but I did have a go on most of the other rides which i really enjoyed. Even though i couldn’t see anything most of time as i couldn’t wear my glasses on the rides. As we were off peak, midweek and not in school holidays there were hardly any queues for the rides so i got to go around a few times and make the most of the day.

I think we would certainly head back to the Gold Coast, or somewhere up in Queensland for some winter sun in the future, would recommend Couran Cove resort in off peak season too.

Here is the video from the sunset at Couran Cove across the lagoon.