We woke at around 5 am for breakfast which included bacon, pancakes and eggs as fresh hot food, this only continued to make me like this hut even more. We got ready downstairs in the indoor area and set off around 6 am back along the route we’d walked the previous day. The snow was nice and crisp after the cold night so we had our crampons on today unlike the walk in the day before.  We removed them again for the scramble down the ridge back onto the top end of the Otemma Glacier which was a lot easier than going up it before as it was also slightly frozen. At the bottom of the ridge we put our crampons and roped up ready for the glacier crossing. There was quite a clear track along the glacier up the Mont Collon Glacier towards the col de l’Eveque, the glacier was fairly easy going initially but then it got a bit steeper and the track went over to the east of the glacier. Further up there were quite a few open crevasses with snow bridges crossing them. Some of the snow was a bit soft in places and had been well trodden by earlier groups so the bridges were not as good as the lower part of the glacier.

We made our way up to the col where the Italian border runs and walked east down the glacier on the other side of the col. This started off good and there were tracks in the snow but further down we kept to the east side on the icy section of the glacier where the crevasses were much clearer.

Once the glacier flattened out we headed down the centre of the glacier in a north east direction towards the moraine on the side of the Haut Glacier du’Arolla. We de-roped at the bottom and had a snack before heading off again. There were some cairns and a flag marking a route over the moraine, we made our way down the other side put our crampons on and headed onto the Arolla Glacier which was dry so no need for roping up again. We saw a large group of walkers, who seemed out on a day walk, heading up the glacier in normal boots and no crampons which i personally wouldn’t fancy. We walked straight down the glacier sticking to the right hand side at the toe where there is a fairly clear path marked glacier path in blue paint and signs. This eventually turned into a normal path signed to Plans de Bertol.

Further along we could see the ridge where the Vignettes Hut sits and can see how little horizontal distance has been covered but that the round about route was needed to avoid the massive ice fall under the hut.

Once on the Plans de Bertol the path splits and there were clear signs to the Bertol Hut which can be seen perched on top of the col.

The route up involved a clear path up and then up on to the remains of the glacier moraine ridge continuing up to the snow line. When at the bottom of the snow patch we saw a group of 70 Belgian Scouts coming down. Apparently they had stayed at the hut the previous night, been up to Tete Blanche and were now on their way down – no way would i want to be responsible for taking them on that trip! Glad they were not at the hut at the same time as us either! Once on the snow we chose to head straight up as there was a good snow covering. Looking at the paint on the rocks it is possible when less snow that the path goes up the rocks.

We continued up the remains of the glacier – decided not to use the ladders up a rocky mound and headed towards the ladders at the bottom of the hut. This was probably one of the hardest parts being a long slog at the end of a fairly long day.

After about 7 hours we made it to the hut got inside and ordered another Rosti for lunch – this again was huge and very much needed! The hut looked nice and gave great panoramic views all over the col. The toilets, whilst outside, even had one way glass for a view whilst making use of them. After a snack we went for a lay down until later in the afternoon until it was time to have another beer! Dinner was a lasagna, which was really nice – the staff just placed it in the middle of the dining room and everyone dived in which was a different approach to the normal tray per table.

The GPX is here: GPX

The elevation profile is below: 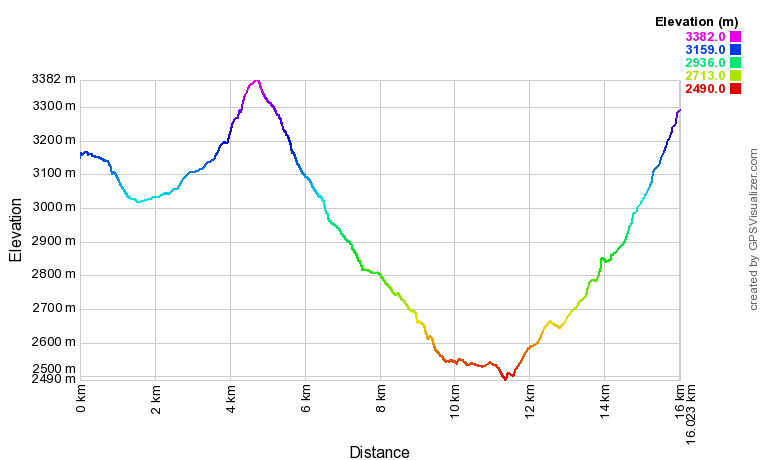