The morning started with a half 4 alarm such that we were ready to get away at first light. The hut guardian had left out breakfast the night before as there was no need for her to wake so early too, she was very keen to point out of there were any problems at all to wake her bit fortunately all was fine.

Having studied the route the previous day we had a good idea where we we heading, there was quite a clear path up the rocks from the hut up and curving slightly to our left. There were some small patches of snow and the end of the Meitin Galcier which we had to cross to bring us back around and straight up the central rocky moraine. Once we reached the bottom of the snow patches heading towards the col we turned towards the Plateau du Couloir and worked out way up and traversing across. The snow varied a lot, some of it being solid ice and needing to cut steps or front point the crampons, and other parts being quite slushy with lose rocks.

After a short scramble over a rocky ledge we made it to the edge of the Plateau having passed the more technical part of the day, and probably the trip. After this we crossed the Plateau and roped up for the up coming glacier crossings, descending into the Sonadon Glacier was quite straightforward and the crevasses were clear to see, we then headed in a north east loop towards the Col du Sonadon. The bergschrund was quite easy to spot and there was a track across it, unfortunately there was also a smaller, completely unseen, crevasse across the glacier a 10 metres up which one of the group did step in up to his waist but was able to make his own way out of. Following that the walk up to the col was easy enough and gave a view down the Glacier du Mont Durand, our next target.

The guide book gave a rough route down the Glacier but as mentioned this was now 10 years old so things had moved. We headed down the centre of the glacier initial and knew to make a right turn under the first icefall to avoid another one further down. Unfortunately, initially we didn’t make enough of a traverse and had to back track further to the south of the glacier. Still unable to find a route through we headed to the very south under Grande Tête de By and went straight down towards the rocky cliffs. Traversing down and north along these there was a route back onto the glacier below the 2nd ice fall. It gave us a bit of confidence seeing some fairly recent cord on the rocks used for an abseil that someone else had come this way too.

As per the guidebook we continued along the edge of the glacier under Tête Blanche but this again became quite crevassed and steep so made our way down and nearer to the centre line of the glacier. A bit of zig zagging to find the best route was needed but we made our way onto the lower parts of the glacier which was now dry with the crevasses clearly visible so we could use remove the rope then continue down.

Once at the toe of the glacier and having walked through some horrid glacer sediment mud it turned out we were the wrong side of the glacial river. After spending at least 20 mins trying to back track and find a way across one of our group gave up removed his boots and waded across, the other managed to balance across on a few rocks. I myself, carrying the rope and not confident in my balance went for the boots off and wade approach which, although cold, turned out to be ok.

We were now on the correct side and carried on down towards the end of the valley, there was the occasional yellow painted rock and a few cairns to follow down but these were few and far between. After turning around the ridge we could see the bridge across the river we were aiming for so made a general route I that direction following the odd marked rock when we saw them and frightening a few Chamois on the way. Finally at the bridge there was just the last few hundred metres of climbing up the path (which cut off the corners of the road track) to go.

Just as the Chanrion Hut came into sight it started raining a bit more but by then it seemed too late to put on a waterproof so I briskly walked the last part in before the weather got even worse. Over 11 hours of walking and nearly 7000kcal according to my heart rate monitor we were finally at the hut. We got settled and grabbed some bottled water and a beer, this hut was much busier than Valsorey. There were a number of groups doing different routes including some on the Haute Route having started in Chamonix and walked into Chanrion Hut from Mauvoisin after a transfer fro Champex. The hut was nice and welcoming, it has inside toilets with sinks for washing and actually has a 4×4 track for supplies. The taps were all marked as not being fit for drinking but as lots of other people were filling bottles we decided to do the same and didn’t suffer any problems, the water came from a small lake just up from the hut. We enjoyed another tasty dinner, paid up (~CHF320) (the supply road made no difference to the price) and headed to bed for another early night after the long tiring day we’d just had.

Here is the elevation profile: 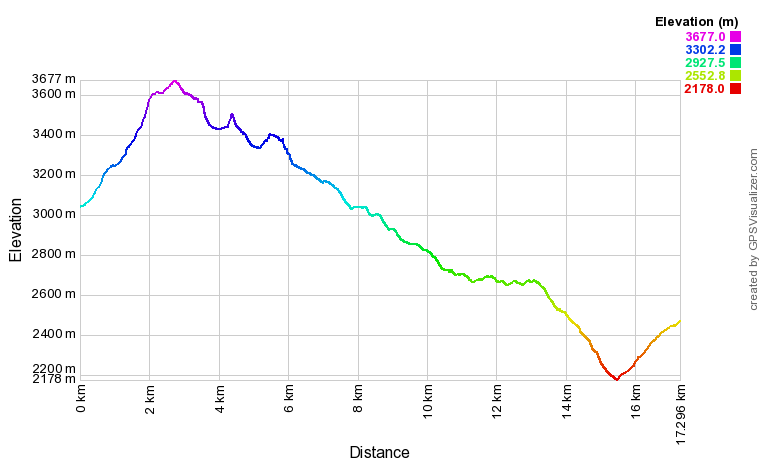